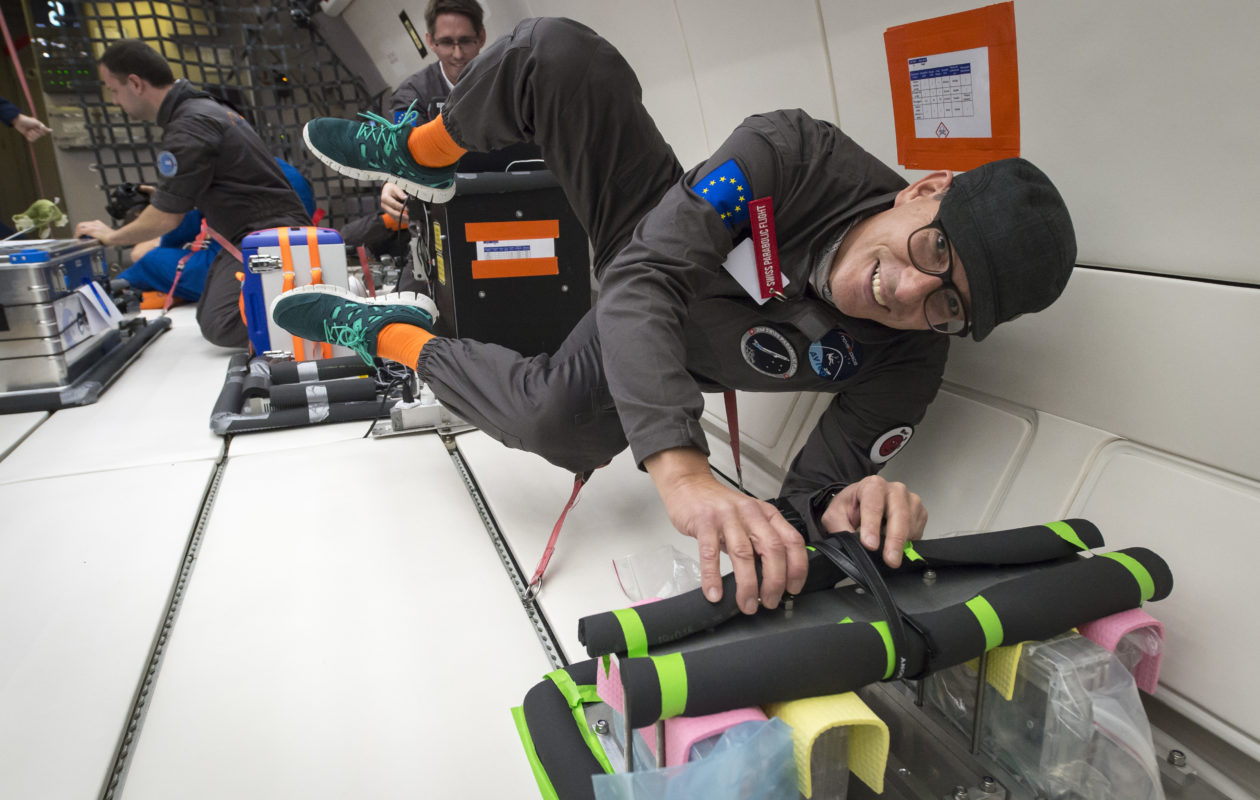 After this successful test of the operational, technical and administrative feasibility of a parabolic flight platform form Dübendorf, and in close collaboration with Novespace and with the respective authorities in Switzerland, we are continuing the flights from Dübendorf in 2016 and beyond.

We do not see the flight platform in Dübendorf in any competition to the already existing ESA platforms in Bordeaux with “large scale” flight campaigns, but rather as filling a strategic gap at the level of „small scale“ parabolic flights with rapid integrations times and an excellent scientific and technical environment due to the University labs nearby.

During the 2nd Swiss Parabolic Flight Campaign on October 22nd 2016, the first full-scale research expedition into microgravity flight from Switzerland will become reality. Novespace, subsidiary of the French Space Agency (CNES), is conducting a Parabolic Flight Campaign (PFC) on October 22nd, 2016 from Dübendorf Airport, Switzerland, with the Airbus A310 ZERO-G. The Swiss SkyLab Foundation facilitates and organizes this research campaign, following the successful first Swiss Parabolic Flight in September 2015 (for more information: microgravity.ch). To support this initiative and based on the priorities identified in the Swiss Space Implementation Plan, the Swiss Space Office (SSO), of the State Secretariat for Education, Research and Innovation of the Swiss Confederation (SERI), provided an initial and subsidiary financial support for researchers conducting scientific experiments or technology demonstrations in microgravity in the 2nd Swiss Parabolic Flight. After a “Call of Experiments” in April 2016 (space.epfl.ch/page-131206-en.html), the proposals were reviewed by the Swiss Space Center and the Swiss Space Office selected experiments from the University of Zurich, from the ETH Zurich, from the UniSpital Balgrist, from the University of Basel and from the Lucerne University of Applied Sciences and Art for funding and flight implementation. Additionally, SpacePharma, a Swiss-Isreali spin-off company will test their technology developed for satellite missions.

The 2nd Swiss Parabolic Flight Campaign shall contribute to the advancement of Swiss capabilities and, in particular, it shall allow for increasing key technological competences and building up knowledge in Switzerland with regard to microgravity experiments.